Growth in the captive insurance market will be driven by intermediaries and brokers establishing vehicles to aggregate the risks of their individual customers, it has been claimed by a panellist at the Guernsey Insurance Forum. 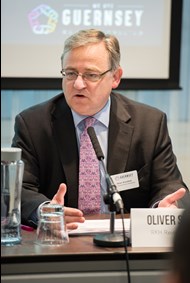 Oliver Schofield (pictured left), Executive Director at RKH Reinsurance Broking, and a panellist at the recent Guernsey Insurance Forum, said PORCs enable customers who, in their own right may be too small to go down the captive or protected cell company (PCC) route, to be grouped together into a larger programme in order to enjoy the benefits of the captive and reinsurance markets.

“It allows smaller organisations to access those underwriting profits, rather than seeing those profits perhaps just disappearing into the insurance and reinsurance world,” said Mr Schofield.

“It also allows those producers, those brokers, to drive alternative solutions into their client base, rather than perhaps some of the more esoteric alternative solutions being the domain of the larger buyer. They suddenly become much more available to the small and very small organisations that are buying their insurance now. It also allows those brokers to drive risk management into the core of each of those individual customers.”

Mr Schofield made the point that while captives would continue to be used by the ‘usual entities’ – those organisations he described as being around for a long time, such as corporate entities, affinity groups, associations and trade bodies – it was smaller firms utilising PORCs who would drive innovation in the sector.

Fellow panellist Mark Helyar of Bedell Cristin, a Guernsey-based lawyer specialising in insurance, reinsurance and insurance-linked securities, agreed. He said he was seeing a number of organisations going down the PORC route.

“PORCs are the major area of growth in the captive sector at the moment,” said Mr Helyar.

“All of the Coca Colas of this world, the BPs and the Shells and everybody, have got their captives already, so if you want to get into another sector, then it needs to be in SMEs.”

The event, which was titled ‘Future stars – where next for the (re)insurance market?’, took place in London on Wednesday 21 September. It was hosted by Guernsey Finance in conjunction with the Guernsey International Insurance Association (GIIA) and attracted an audience of more than 150. It was moderated by ITV News presenter Alastair Stewart and featured Carlos Wong-Fupuy, a Senior Director at A.M. Best, as the event’s keynote speaker.

Guernsey in the running for a host of Captive Review awards

Ahead of the curve

Pandemic crisis is a chance to take stock

Putting the green into greenback