Financial services in Guernsey had been performing well in difficult economic conditions in recent years, but there has been recognition within industry and government that efforts should be made to "reboot" where opportunities could be identified.

As a result a new short term strategy to bring fresh impetus to Guernsey’s financial services sector is being progressed by Guernsey Finance with buy-in from industry and government. It comprises five priority action areas that have the potential to create immediate "go forward".

We sought areas where we could build on services currently delivered – to build on actual or perceived strengths. It was also important for us to look to build a strong specialist position where possible – Guernsey does best where it is the "go-to" jurisdiction for something, such as our expertise in listed funds, private equity or insurance-linked securities.

Building on our strengths and developing new products we can create a market-leading competitive position.

Much of the strategy, at least in its early stages, is looking to build and exploit opportunities where there is the potential to quickly create momentum. That’s seen as key to the success of the plan.

Wealth management and brokerage, and 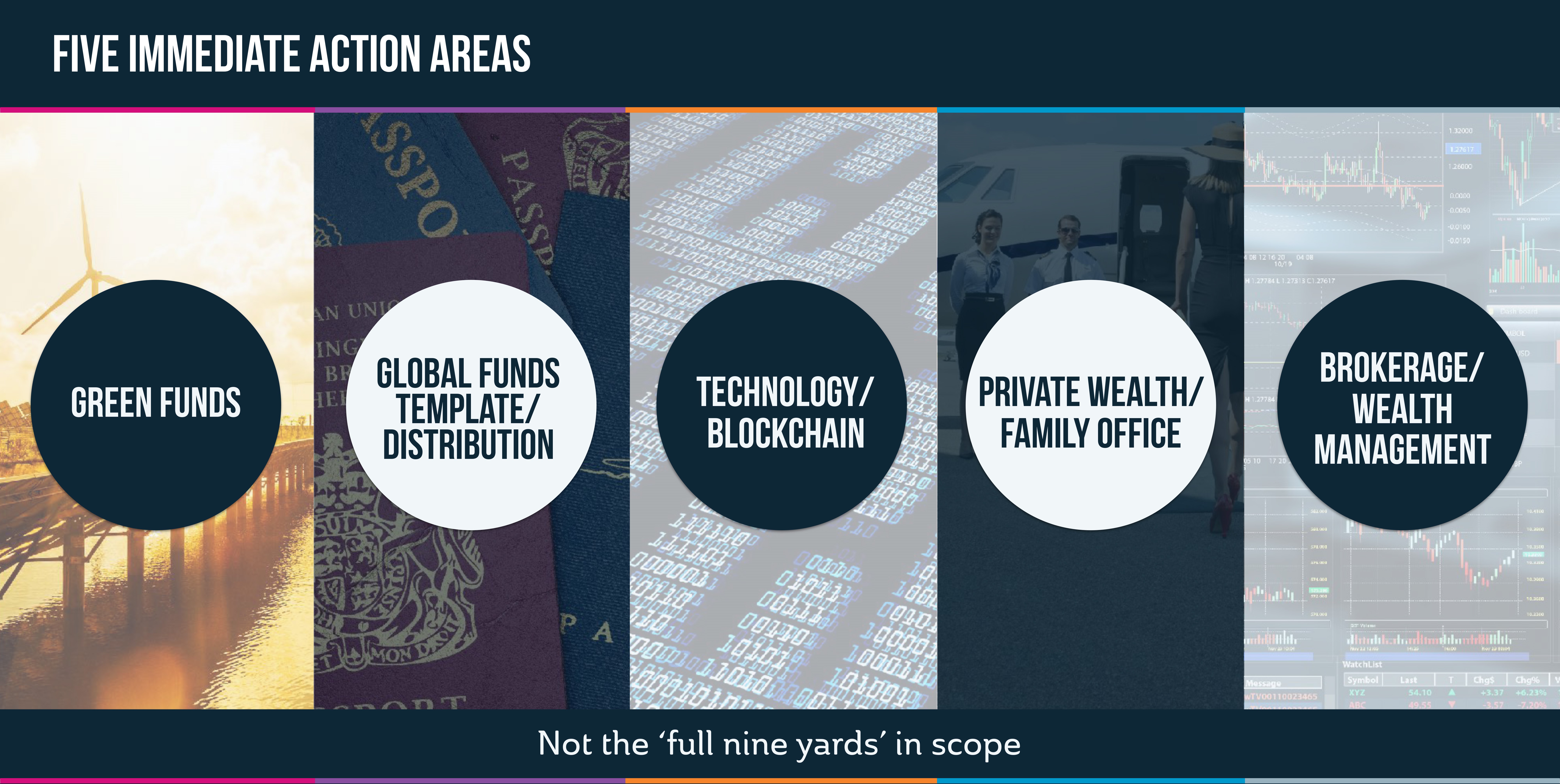 These five areas are mutually reinforcing, and reinforce other initiatives. Combined with better promotion and positioning, they have the potential to be developed into a powerful Guernsey proposition. The action plans will also seek to leverage Guernsey’s Brexit strategy and to continue to link ourselves closely to the City of London, to ensure we are recognised as a strategic asset for the City, supporting and complementing UK competitiveness.

Strategy and planning is not being developed in a vacuum and development is private sector-led. Under the umbrella of Guernsey Finance, we are working very closely with industry in developing these five workstreams. Each now has strategy group with industry representatives involved and the initiatives themselves will evolve over time.

Since launch four of the five groups have been convened, several have met many times and before the end of this month strategy statements will be published for both the green investment and global funds distribution priority areas.

Green finance is an area ripe for Guernsey to develop market and product leadership. Our ambition in this area is to be the "go to" international finance centre for green finance through development of the broadest and best range of product. We will be exploiting work on regulatory product development already undertaken by the GFSC in this area and there a burgeoning relationship with UK green finance to exploit.

The potential for green and sustainable finance is enormous and streams into major global initiatives. Action in this area builds on Guernsey’s strengths and expertise in private equity and infrastructure, and supports other initiatives in areas such as impact investing, and supports a general repositioning of the island’s financial services offer.

In the last eight weeks, we have held two strategy group workshops and undertaken joint product development sessions with the GFSC and industry. Further to this two joint Guernsey Finance/GFSC ‘sherpa’ visits to London have taken place since January including sessions with UK asset managers, meetings with the Corporation of London and Standard & Poor. A straw man strategy statement is near-finalised and ready for publication later this month.

Brexit is also requiring both the UK and ourselves to become more aware of the need to pivot our trade to the rest of the world. We can help the UK in doing that and exploit the ongoing mutual recognition debate for commercial advantage.

We are keen to support the development of a global template for mutual recognition but will look to build out and improve our current market access through expanding our own bilateral recognition agreements.

Our global distribution capability is already pretty good and we need to do a better job of telling people about it. The global issue of passporting and mutual recognition will create a platform for us to do just that and gives us an opportunity to talk more loudly about ourselves and rebut some competitor myths.

Again a strategy group has been meeting and another strategy statement is nearly finalised for this action area and similarly publication is likely later this month. Messaging from this action area was already incorporated into the Guernsey Funds Masterclass in January, I have already produced several blogs on this theme, which will be joined by more published media editorial in coming weeks as part of a proactive PR campaign developed by Guernsey Finance based on our support for mutual fund regime recognition as a catalyst to increase efficiencies and reduce global regulatory costs. This will be supported by planned positive international engagement and outreach by the GFSC to further expand our current distribution and reach.

Work of the other strategy groups is less developed but updates on their progress and strategy statements for each will follow.

There is plenty of good work already going on in Guernsey, and we should be positive and proud to tell the world our great story.

Head of Locate Guernsey is named

Pandemic crisis is a chance to take stock

Putting the green into greenback