A close US election is “everyone’s worst nightmare”

Guernsey Finance Chief Executive Rupert Pleasant reflects on a conversation with broadcaster and journalist Andrew Neil as the final part of our Funds Forum webinar... 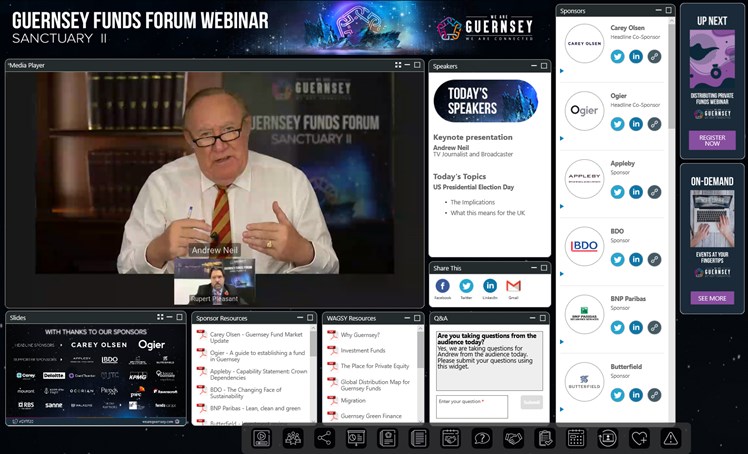 What a privilege to get to speak directly to Andrew Neil and hear his comprehensive assessment of US politics in what he described as a “febrile” atmosphere.

It may still take some time for us all to discover if Donald Trump stays in the White House, or if Joe Biden claims what Andrew said was likely to be a rather pyrrhic victory, setting him up as something of a “lame duck” president from the off.

What would the rest of the world, and Guernsey in particular, get from either candidate? Andrew said both believe in “managed” rather than free trade; both would be looking to provide a fiscal stimulus – Trump from tax cuts and Biden through a massive infrastructure development programme. But taxes would rise under Biden to fund that infrastructure campaign.

Were it not for Covid, this week could have seen a virtual coronation for Trump rather than a down-to-the-wire contest, Andrew added. A turbo-charged US for the next four years could lead to a economic boost for what is already a strong economy, he said.

“What’s holding back the US isn’t its economy. If it can overcome its political problems, the animal spirits of the US economy could be unleashed post-Covid, and we could be set for the roaring 20s again, which would be no bad thing.”

In terms of learnings for Guernsey, Trump “a natural deregulator” has made moves to roll back regulation over the past four years, particularly in energy, less so in financial services.

Biden, Andrew said, would come under pressure to restore some of those regulations. Biden would be more likely to tighten up relationships with the supranational organisations who influence regulation and policy in financial services – but without control of the Senate, he would be unlikely to spend much time in that area. And would Biden have much appetite for this sector given his main residence in Delaware?

In the green and sustainable space, Biden would be keen to return the US to the international table on climate agreements and green is a key factor in his infrastructure development plan.

It was a fantastic to speak to Andrew on what we hoped was decision day for the United States. Who knows now how long we’ll wait for a decisive result?

It also made me somewhat relieved to be speaking from Guernsey, enjoying the suspense and “entertainment” from a distance.

With so many changes politically around the world, it makes us all the more grateful that Guernsey is such a stable and secure jurisdiction, especially when it comes to financial services.

Reasons to choose Guernsey for funds

GIIA urges firms to follow after committing to climate pledge