Home News 2021 Good governance and the role of women in family offices
Sectors: 1065

Good governance and the role of women in family offices

WE ARE GUERNSEY has commissioned Family Capital to produce a report covering the role of women in family offices, the contribution they make to good governance in the sector, and the state of the family office market in the Middle East.

The report has been published today (see below).

As a global finance centre with a strong tradition of providing specialist private wealth services, Guernsey has a proven track record in promoting good governance in corporate structures and family offices. Women are strongly represented at senior levels in our private wealth sector.

Family Capital was also able to draw upon its substantial database of more than 1,000 single-family/principal offices to reach a number of substantive observations of how the industry has responded to greater gender equality.

Women principals and chief executives of family offices are few and far between, with less than might be expected given the rising number of women with substantial wealth as a ratio of the total.

Governance structures are likely to become more robust for family offices in the future, which should enhance diversity within the sector. Attitudes appear to be changing within the sector towards governance.

Family Capital also looked at the Middle East family office world with respect to gender diversity. Often women play a very important wealth management role in the Middle East which might not seem obvious to the outsider.

Broader studies also suggest women have greater control of assets than ever before in the region. That said, our respondents from the region suggest wealth management advice is still male dominated.

Women and the role they play in wealth creation and the management of wealth is more important than ever. In many ways, they are setting the agenda for the whole wealth industry, at least certainly more than they have in the past. But, as this report shows, their role within the family office world is still significantly unrepresented. 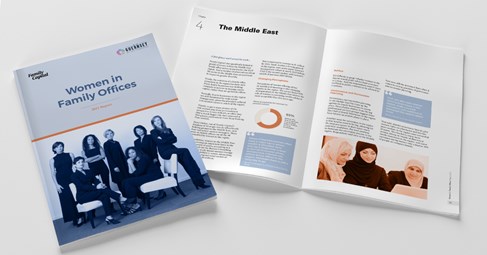