Why is the Guernsey PIF successful?

Guernsey’s Private Investment Fund (PIF) regime was originally introduced at the end of 2016 as a simple and cost-efficient route to market for managers with close relationships to smaller numbers of sophisticated investors. They have increased in popularity each year since and at the end of last year more than £14bn was invested in Guernsey PIFs. In this article, Henry Freeman, Strategic Adviser to We Are Guernsey and a non-executive director to investment funds, looks at what they are, how they are used and recent rule changes which have increased their popularity further.

A key element of the PIF’s popularity is down to the flexible approach to structuring in addition to the lighter regulatory touch. For example, Private Investment Funds can be established as a traditional limited company or limited partnership fund, unit trust or in a cell company format (protected cell company or incorporated cell company) and they can be either open-ended or closed-ended. Last year the audience for PIFs was broadened with two new routes to registration introduced. We’ll come back to what those routes are shortly but first it’s worth circling back to see how PIFs have traditionally been used.

How are PIFs used?

PIFs rapidly built a fanbase amongst private equity and venture capital managers. These are asset classes where funds generally have smaller numbers of large sophisticated and expert investors and where the closed-end GP-LP structure is the usual format.

They are also ideal and cost-effective for new fund managers or established managers that are starting a new or innovative fund strategy, as they can build a track record with a small number of close investors. Where the investments are in liquid securities, an open-ended format works well with investors being able to deal regularly at NAV. If successful the fund can build to an economic size, enabling it to potentially convert to a standard regulated fund and attract wider investors to it.

Interestingly, of the £14bn invested in PIFs at the end of last year, the split between closed-ended format (ideal for private equity and more illiquid alternative assets) and open ended (well suited to newer managers and liquid strategies in incubation mode) was broadly equal, according to data provided by the Guernsey Financial Services Commission.

Where can PIFs be marketed?

Guernsey’s pedigree as a respected international financial centre provides greater flexibility in their reach. PIFs can attract global capital from the US, Middle East and Asia as well as being easily marketed to institutional investors in the EU and UK in accordance with the provisions of AIFMD under the National Private Placement Regime (NPPR).

Seamus Fox, Commercial Director at TMF fund administrators, notes that while Guernsey is not part of the EU, it retains strong relationships with both the EU and the UK and as such Brexit hasn’t really affected Guernsey compared with other European jurisdictions. He adds that ESMA has taken views on a variety of different offshore jurisdictions and Guernsey is one of the more favourable jurisdictions. This has helped PIFs and NPPR to become a well-trodden path for Guernsey administrators.

The original PIF route to market required the fund to appoint a locally licensed manager, subject to regulation in Guernsey.  Flexibility was introduced last year with two new routes that don’t require this. Route Two is targeted at “Qualifying Private Investors” (categorised as professional investors, experienced investors and knowledgeable employees) and Route Three which has been developed for families and family offices.

The new Route Two has fast become the most popular of routes to market, according to Kate Storey, Partner at law firm, Walkers (Guernsey) LLP. She says a key reason for this is that non-Guernsey fund managers can take advantage of not having to have a Guernsey manager.

Barney Lewis, New Business Manager at ZEDRA – a fund administrator in Guernsey, also highlights that as Route Two PIFs are limited to Qualifying Investors, they are more likely to be able to meet the requirements of being an accredited investor in the eyes of the US regulator.

While Route Three’s family approach has got off to a slower start, it is gaining interest from family offices and Storey sees family oriented PIFs as becoming attractive in place of a traditional trust structure where a family wants the enhanced corporate governance of having a regulated fund structure. 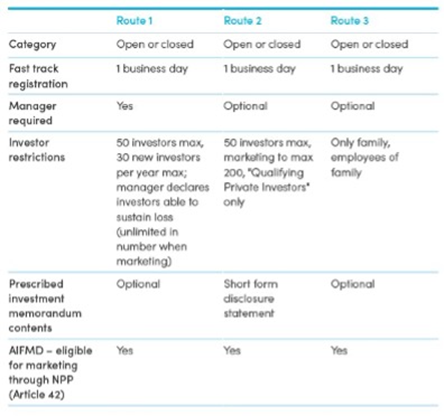 We’ve already touched on the simple and cost-effective establishment of a PIF – the PIF application form is just one page and there is no requirement for a full prospectus to be submitted. Authorisation of PIFs by the regulator, the GFSC, generally takes just one day.

There are other private structuring solutions marketed in other jurisdictions, but a clear benefit of Guernsey’s PIF is that while it benefits from lighter regulatory requirements, investors can be reassured that funds are required to be audited by a third party. This can also future-proof the manager as their track record within the PIF is fully verifiable – again, the PIF shows itself to be a very effective incubator for scalable investment products.

Another material advantage, which Frances Watson, partner at law firm Mourant, highlights is that as the PIF is regulated, albeit on a lighter-touch basis, it can make dealing with third parties easier from a due diligence/know your client (KYC) perspective, for example for opening bank accounts, making investments etc. This is because the KYC element focusses at the regulated fund level rather than diligencing underlying beneficial owners.

PIFs – a portal for the future

Given the short time to market and the ability to incubate new ideas, it is perhaps no surprise that PIFs are being utilised at the vanguard of new asset classes and investment sectors.

Digital assets are just such an example. The fact that the fund set up is rapid means it is in step with the pace of the underlying investment opportunity too. Indeed, ZEDRA expects to launch a new cryptocurrency PIF for a client in Q2 2022.

Another area that has been gathering increasing academic and investor interest is cannabis and psychedelics for medicinal purposes. Leafy Tunnel Fund 1, LP was launched as a PIF earlier this year under the Route Two process and following the launch, Tom Carey, a Partner at law firm Carey Olsen, commented "This launch demonstrates that Guernsey is well equipped to service innovative asset classes." Innovation continues at Imperium Fund Services, Leafy Tunnel’s fund administrator – Charlotte Parr, Client Services Director at Imperium, adds that they are currently working on other PIFs, including a sports fund and a debt fund.

It's not all about “the new, new thing” though, as PIFs remain relevant for private equity and traditional asset classes as well.  In short, no matter the asset class, no matter the manager type, age or size, and no matter the structure of the fund that is required, the PIF delivers a simple, cost efficient and quick route to establishing funds oriented to qualifying and sophisticated investors.

Henry Freeman is a professional non-executive director focused on investment funds and alternative assets, a member of Guernsey’s States Investment Board (responsible for Guernsey’s sovereign and pension fund assets) and is a Strategic Adviser to Guernsey Finance.

What is a PIF?